Originally from Sydney, the meteoric rise of the group 5 Seconds of Summer has made people dream. In late 2011, a group of high school friends started uploading covers of popular songs to Youtube and play gigs in local pubs. Based solely on social media hype, the band caught the attention of record labels and eventually struck a deal. In 2013, 5SOS accompanied teen pop idols One Direction on a world tour and since then there has been no looking back.

With over four studio albums and chart topping hits such as She looks so perfect, old me and The teeth, 5SOS now includes frontman Luke Hemmings, lead guitarist Michael Clifford, bassist Calum Hood and drummer Ashton Irwin. Their upcoming fifth album, titled 5SOS5, takes their pop punk spirit and mixes it with influences like Bruce Springsteen, Tame Impala and Taylor Swift. songs like Complete mess and Me, myself and me already have fans who go gaga. On the eve of a North American tour, the members open up about the group’s evolution from a “boy band” image to discovering a more mature sound, and what to expect from the album. Excerpts:

We heard that this album was born on a trip to Joshua Tree. Tell us about the writing process.
Luke: Good question. At the end of 2020, we made the decision to go out as a group in Joshua Tree. It was far enough from where we live in LA, but close enough that we could drive there. And we came out with the intention of making music and with the intention of hanging out and seeing what happens. But we started making an album. One of the first songs we did was Complete mess, which is the first single. From there, we kind of snowballed and thought, “So okay, now we’re in the process of making an album.” I think it was just nice to be isolated from everyone, and just be “the band”. The genesis of the album came from being in this place of isolation – just the four of us. I think it changed him that way, and it was super fun and not stressful, which I think is reflected in the songs.

The only Complete mess It was your first time writing and producing a full song. How was this experience?
Michael: It was great! It was so different from the way we made music in the past. And a much-needed creative change, I think. We were able to really understand what we wanted to sound like and how we wanted to create music in the future. We have tried to make the experience as fun as possible and
as simple as possible and really enjoy the process.

And because of that, do you think the music is a bit different from your previous work?
Luke: Yeah, I think it’s definitely different. I think it has a more identifiable “group sound”. I think that sounds like exactly how the band was feeling at the time, as opposed to someone else’s influence.

Your previous work has been compared to bands such as Blink 182 and Green Day. What were the inspirations for this album, in terms of genre?
Michael: God, it’s so varied with the kind of music we were doing! We were making the kind of music that felt like it could be played in an arena, but also played on the radio. And also, we always wanted it to have that pop-punk spirit, but we didn’t necessarily want to do pop-punk. So we had to find a way to make our own version of it in 2022. So there’s no real genre in particular; there are influences from here and elsewhere, like artists like Bruce Springsteen. And then we go to the other end of the spectrum and we pulled influences from electronic music, so there’s Tame Impala, but there’s also modern stuff like Taylor Swift. It’s a bit of everything because we are big fans of music. And we just wanted to create something that we thought was fun.

How did you feel about the evolution of your sound from your previous work to this upcoming album?
Luke: I think we started out as a very pop-rock, pop-punk band, and I think it evolved so much from there. It’s become a bit more industrial and electronic, almost like a Depeche Mode style. And then it turned into a brighter “fat chord” sound. A bit like The Verve and Coldplay. I think it’s really exciting to be in a band that can switch genres like that and still try to maintain some sort of common thread. It’s also why we’ve been in the band for so long. We tried new things and didn’t limit ourselves to just one box. We have worked very hard to be able to do this. We could go back and do a pop-punk album if we wanted to and then do something like Complete mess. And I’m so excited to be a part of it.

And how have you personally evolved since becoming a band?
Michael: We have all become the people we are today thanks to the last 10 years that we have spent together. Because when we started this band, we were kids, and now we’re adults. We have changed as people and as musicians. We are all different in our respective little worlds in which we live.

What can you tell us about the upcoming fifth studio album. How did you finally decide on the name 5SOS5?
Michael: I think the name was pretty obvious, and it was right in front of us. It got to a point where our fans called the album 5SOS5 for so long that it was somehow blasphemous to call it anything else. The album was already named at that time. Even before we made the album, it already existed, so we let the fans name this one. And they can expect a multitude of songs – around 19 songs. We also have a new music video for me, myself and me. We shot it in London. I love this video, and I find it really simple and effective. We put a lot of love and a lot of thought into these songs. It’s definitely a journey from beginning to end of this album. 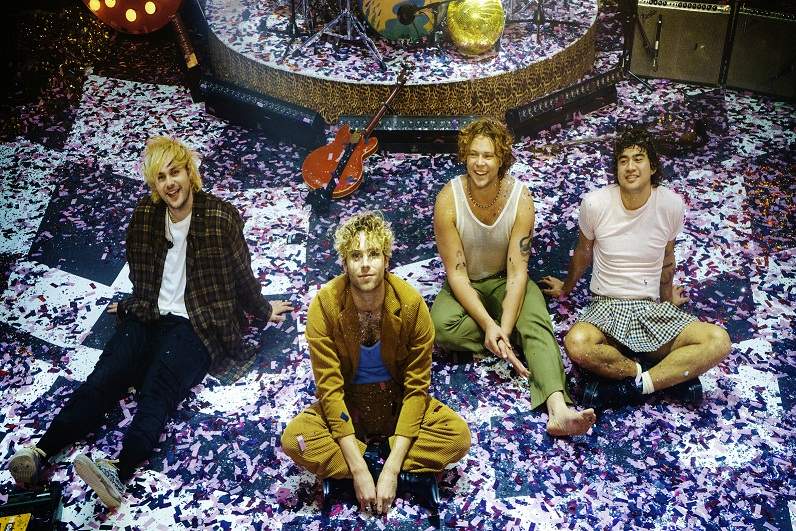 What’s it like to go on tour again? Did you miss the road or was it a welcome break?
Luke: I think a bit of both. It’s amazing to replay shows. This tour has some of the best shows we’ve played in terms of the set we put together for it. But I also think there was definitely some gratitude that we weren’t able to do it for a few years. So yeah, I think it’s a bit of both.
Now we are excited to go to Mexico and North America and then Australia.