Alexander May, the founder of creative consultancy Sized, has opened a flexible studio in a former industrial building in Hollywood that will host photoshoots, events, exhibits and more.

Sized Studio was designed on 5,000 square feet (465 square meters) in a former industrial space. The space will host commercial projects, events, dinners, performances and other experiential marketing activities, as well as programs for the public.

“Sized Studio is an exciting step in the development of the Sized brand,” said May. “It’s designed to create strong collaborations with designers, brands, and creatives. Sized Studio gives another level of access to environments created by Sized.”

A variety of spaces in the former industrial building can be reserved for photographers to film campaigns, galleries to hold exhibitions and brands to host activations.

Ceiling heights in different rooms range from 10 to 30 feet (three to nine meters), and the majority of spaces are whitewashed to provide a blank canvas.

Among the larger spaces is a 1,612-square-foot (150-square-meter) cargo bay, which features exposed beams and built-in lounge seats with black cushions.

Anyone renting a space will have the option of engaging Sized’s consultancy services, which encompass creative direction, scenography, site activation and curatorial consultation.

“There’s no limit to the type of activations that can be done in Sized Studio,” May said. “What’s unique about Sized Studio is that it’s adjacent to Sized, allowing people who use it to connect with the larger culturally aware community that Sized embodies.” 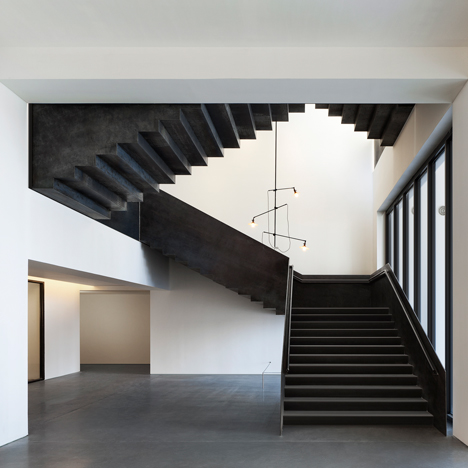 Although the studios officially open on October 17, 2022, Kim Kardashian’s underwear brand Skims has used the studio before, while upcoming public programming includes a planned showcase of Andy Warhol photography.

May founded Sized in 2021, following a career in creative direction across a wide variety of venues and industries.

Prior to this venture, May founded and served as creative director of Fondazione Converso in Milan from 2017 to 2020.

The Brooklyn venue A/D/O by MINI hosted several creative events and installations before it closed due to the economic fallout from the Covid-19 pandemic.