Announcements, events and more from Tyee and selected partners

Curious to know what our journalism has achieved and how we are progressing? Dip.

Hao’s favorite places to travel with his camera are the Rockies and I-93, but he also enjoys the Sea to Sky, Highways 1, 5 and 3, Salt Spring Island and Vancouver Island.

Hao images and videos posts on his Instagram page suggest an amazing road trip. You look over his shoulders as the towering boulders and evergreens that make up the Rocky Mountains zip past the highway. Chinese folk songs and ballads play the soundtrack to his adventure.

Hao’s giant homemade camera appears in almost every photo he posts. There’s no roll of film involved – instead, he exposes his images on a glass plate that spans the full span of his body. It takes three large tripods to hold the thing in place and the whole setup is a head taller than it. At full size, the camera reaches 70 inches long.

It’s the kind of instrument that makes a categorization of photography as “large format” – which typically describes film sizes around four by five inches wide – a little less meaningful.

Hao’s Instagram, which has been active since 2018, is littered with photos of park benches, rock faces, trees and other still life forms, many of which were taken on his much smaller camera. it manufactured in 2015 and which features 11 by 11 inch plates. It took over a hundred ambrotype glass plate photos with this camera.

But the wet plate images cannot be copied or enlarged, so to get larger images, it needs a bigger camera.

In 2019, he decided to make one himself. Things quickly escalated.

the collodion wet plate process Hao relies on requires that the image be immediately developed in a large, portable darkroom.

If you want to take portraits, Hao told The Tyee, it’s relatively simple to keep a large camera like this in a studio or at home. But Hao wanted to get off the grid and get landscape shots across the country. He needed the camera to be portable and wanted to be able to operate it without assistance.

So, over the course of about eight months between 2020 and 2021, he transformed a bus into a motorhome with a darkroom.

“A huge plate is so difficult to develop in 20 seconds,” he said.

If you watch enough videos and photos of Hao – I’ve seen every one of them – you start to feel another presence just off-screen and out of shot, documenting Hao as he walks through the process at many times. I asked Hao who this person was.

Hao and his wife Crystal met as classmates in high school, and they are often together. She also performs some of the background music for her videos. “She loves the songs,” he told me. 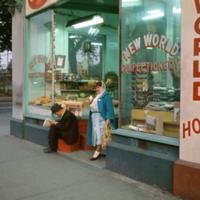 So what keeps this person moving forward in a tangerine jumpsuit when their art form requires repeating an extremely technical, cumbersome, and mysterious task over and over again? The answers can be found in his images: dark, haunting hues, stunning detail, sometimes charming and sensibly analog imperfection.

“I’m not saying the old process is better than digital. Of course, today’s digital technology is simple, fast and awesome,” Hao said. “But for me, the image capture techniques of old, especially the wet collodion process, offer better quality, more tone, more detail and a larger format. An image made with the old process looks more realistic, closer and can be stored longer.

“Most importantly, I love it, and I think you will too.”