With the upcoming release of the Foo Fighters horror-comedy film Studio 666, Grohl is returning to his more aggressive side, telling Rolling Stone he recorded an entire metal album as the film’s fictional band, Dream Widow. .

Studio 666 follows the Foos as they settle down to record their 10th album in a dilapidated mansion. “I end up finding this basement scary. And I go to the basement, I find this tape of a band [Dream Widow] from 25 years ago that was recorded there,” Grohl told Howard Stern. “And there’s this song that if it’s recorded and finished, the fucking demon in the house breaks loose, and then, whatever, all hell breaks loose.”

Grohl has already released a thrash headbanger called “March Of The Insane,” but tells Rolling Stone that a full Dream Widow album will hopefully arrive in time for the film’s premiere on Feb. 25. In the film, the Dream Widow singer, as Grohl puts it, “went mad, murdered his entire band over creative differences, then committed suicide in the house.

“It will be the lost album,” Grohl continues of the new project. “It’ll be the album they were making before he killed the whole band.” When asked if it will be released at the same time as the film, Grohl adds, “I mean, I work fast, but damn this delay is gonna kill me. Yes, I will release it for the movie. By February 25, there will be a Dream Widow disc.

According to Deadline, Foo Fighters star in the movie they made in secret, Studio 666, about what happens when the legendary rock band rents an Encino mansion steeped in macabre rock and roll history, to record their 10th album. . The problem is, Leader Grohl is creatively blocked, and when the evil forces in the house burrow into his consciousness, the creative juices begin to flow, but so does the blood. Can the Foo Fighters finish the album, with the band still alive to tour? A new trailer for the film is shown below:

Open Road Films acquired the worldwide rights, and the distributor set up a wide theatrical release in over 2,000 theaters on February 25. With Grohl and bandmates Taylor Hawkins, Nate Mendel, Pat Smear, Chris Shiflett and Rami Jaffee playing themselves, the cast includes Whitney Cummings, Leslie Grossman, Will Forte, Jenna Ortega and Jeff Garlin. The picture is directed by BJ McDonnell and the international release date will soon be set by Open Road CEO Tom Ortenberg and Foo Fighters. 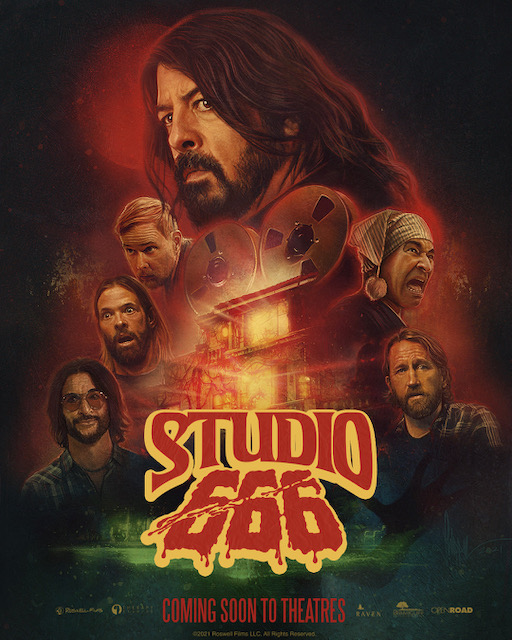 Based on a story by Grohl, with a screenplay by Jeff Buhler and Rebecca Hughes, the film is directed by BJ McDonnell. He directed Hatchet III and Slayer: The Repentless Killogy, and was a cameraman on films such as Malignant and James Wan’s Top Gun: Maverick. The film mixes fear with the playfulness and mischief evident in the group’s music videos. Given its superstar profile, the Foo Fighters group managed to keep the film project fairly secret.

“After decades of ridiculous music videos and numerous music documentaries under our collective belts, it was finally time to take it to the next level…A horror-comedy feature film,” Grohl said. “Like most things Foo, Studio 666 started with a wacky idea that turned into something bigger than we ever imagined possible. Filmed in the same house where we recorded our last album Medicine at Midnight – I told you this place was haunted! – we wanted to recapture the classic magic of all our favorite rock and roll movies, but with a twist: hilariously badass gore. And now, with the help of Tom Ortenberg and from the team at Open Road Films, we can finally pull this cat out of the bag after keeping it our best kept secret for two years. Be ready to laugh, scream and headbang into your popcorn. Studio 666 will fuck you up.