With energy prices going crazy, now might be a good time to figure out how much your studio, synths, and other gear are costing you to get started.

Even with government intervention, the cost of electricity is more than double what it was this time last year. With many other costs on the rise, it might be a good idea to better understand what your studio is costing you. This means you can make more informed decisions about what to enable and what to disable.

Now, measuring a studio’s energy use is like measuring a piece of string. It all depends on the length of your chain. So I can’t really give you general statements on the cost of running a typical studio. For starters, what is a “typical studio”? What I can do is measure my usage, provide examples, and show the data I’ve collected so you can do the same or extrapolate the costs to apply to your situation.

To solve this problem, we can either measure it with a device such as a smart meter or use this remote school equation:

So if you know how many amps your synthesizer draws, you can multiply that by the voltage to get the wattage.

Here is an example. The ModularGrid.net website has a facility where you can simulate your modular synthesizer, and it will give you the power consumption based on the published specs of the modules. It’s not always accurate because the data isn’t always included, but it’s good enough for this example. 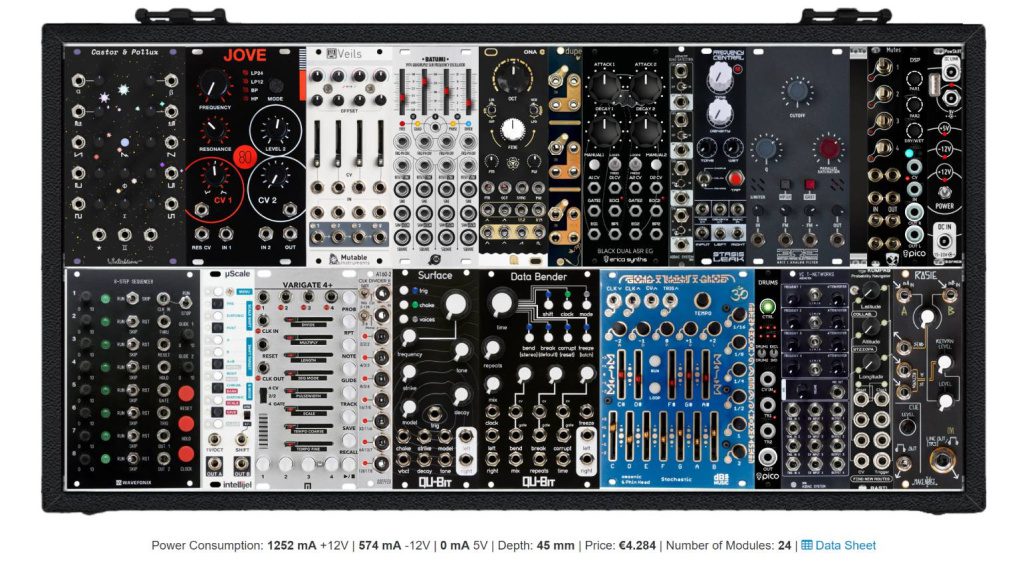 Example of a modular grid

To convert this to a monetary equivalent, simply convert it to kilowatts and multiply by the cost. So let’s call it 22w which is 0.022kw and multiply it by 34 to get the cost in cents:

It seems very affordable, so it doesn’t look like I’ll be selling my Eurorack to save on energy costs. But that’s only a small part of a studio; what about all the other gear?

Take measurements with a smart plug

Digging through the published specs to find the amp usage on your gear is one way to do this. But it’s probably more efficient and accurate to measure your gear because it works in your situation. A great way to do this is to use a smart plug with energy meter. These come in all shapes and sizes, some with built-in screens and others you access through an app. I got a pack of four OnePlug smart plugs from Amazon for about £20.

The beauty of the smart plug is not only that you can connect a whole bunch of things to it and measure the energy used, but you can also turn them off remotely. I often find that my power outlets are inaccessible under desks or behind other equipment. This means a lot of things stay on or on standby because I can’t reach the power switch. With everything plugged into a smart plug, I can turn it all off with just a tap of an app. It’s pretty cool. 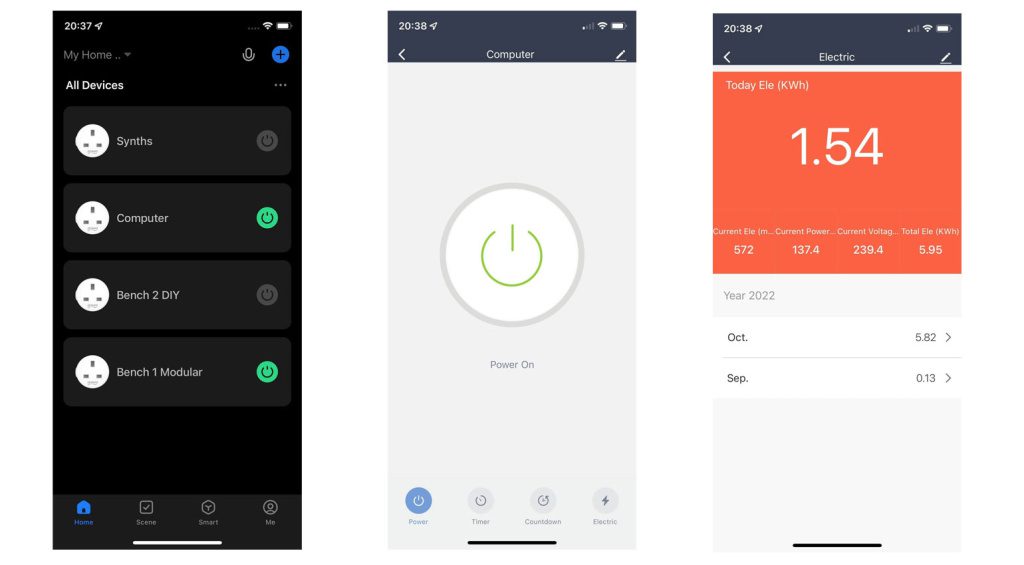 So for my studio environment I divided my gear into four sections, one for each take.

So, assuming each section is an hour long, let’s take a look at the numbers by Smart Plugs.

If I were to take the worst case scenario, with everything running at the same time, so rendering video while recording my modular synths, sequencers and a bit of soldering on the side, I’m consuming 523 watts, which equates to 17,782 pence per hour. If I extrapolate this to an 8 hour day, 5 days a week, 50 weeks of the year, I arrive at a grand total of £355.64. EON estimated my household bill (I’m on 100% electricity) at £3,800 with the ceiling.

It’s interesting to see that my studio, even when running at full capacity all year round, does not consume 10% of my electricity consumption. In reality, it will be much less because I am never very busy. Your results will of course vary depending on the nature and amount of equipment you have.

How to save money?

With my smart plugs installed, I can now feel good about turning everything off when I leave. But that won’t make a huge difference to the bill; some but not many. So where are the problems? My studio is in an outbuilding and is not connected to central heating. I have a small oil heater that I turn on to keep me warm in the winter. Let’s put this through a plug.

The heater draws 10 amps, drawing 2.3 kW, which equates to a strenuous 78.2 pence per hour. The problem is here. If I only use it during the winter months, it will double the energy consumption of my studio.

If I look at an overview of my energy consumption during an average day, it will look like this. 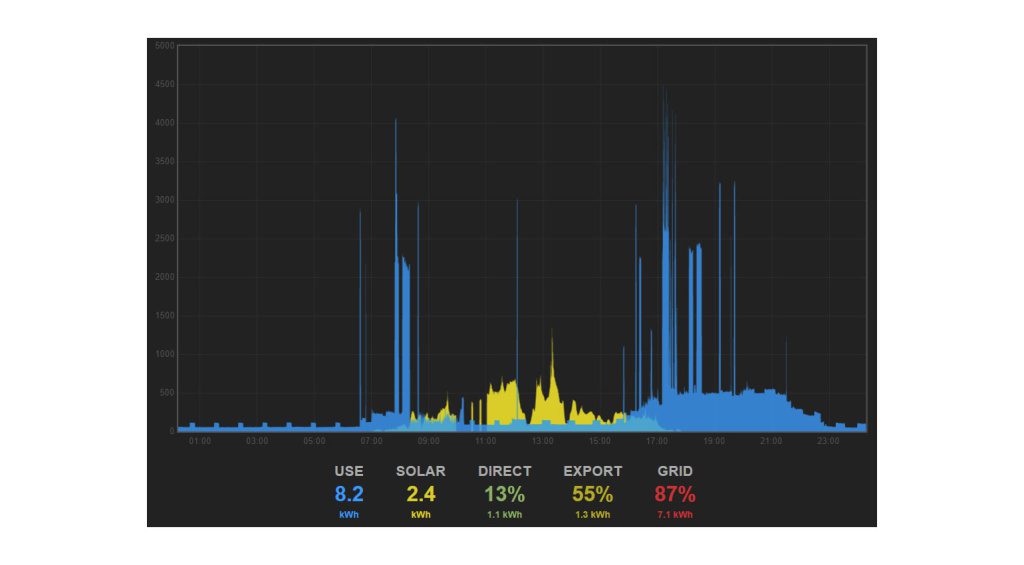 The blue draws electricity from the grid, the yellow is the electricity production of our small solar panel. You can see the peaks at 7am, 12pm and around 4pm which is when I turned on the kettle and had a cup of tea. The 8am peak is probably the dishwasher after breakfast and the washing machine. Around 5 p.m. I cooked dinner, and after that the dishwasher probably started up again.

During the day my use of the studio is completely covered by the sun and barely registers. In the evening, the result of having children on computers, televisions, lights and other devices consumes a lot of energy. But on the whole, the big culprits are the essentials; cooking and cleaning and it’s September so we haven’t even started the heating yet.

One thing the preview makes clear is that we would benefit from solar batteries. When the panels were installed about 6 years ago, batteries were not a viable option. They are now. If we could store yolk during the day and use it in the evening, it could drastically change our energy consumption. However, I got a quote for £5-7000 to install a battery system, and over the course of a year our solar output really only covers a quarter of what we use. So it’s not going to make us self-sufficient, but a quarter off your bill is great. It’s just that it would take 5 years to pay for it.

The good news is that your studio gear probably doesn’t use as much power as you think. You can minimize its impact by using smart plugs and becoming pedantic about turning everything off. The bad news is that to get adequate savings, you’re going to have to eat cold, canned food, in the dark, with a sweater on.

Solar power and batteries are great, but be aware that you would need a huge grid to properly power your whole house all year round. Our 9 panel system produces 2000 units per year. An up-to-date system could provide double that in the same space, but that’s still less than half of what an average all-electric home would use. If your heating and water are supported by gas or oil, solar might better meet all of your electricity needs. But fossil fuels have their own costs and challenges.

My advice is to get good information so you can make informed decisions and adopt an energy-saving mindset. Smart plugs have been brilliant and can be used throughout the house to turn things off and meter usage. I use an OpenEnergyMonitor system to monitor my power from the grid and solar generation. It’s much better than a regular Smart Meter because it logs all readings and gives you local access without going through your provider or a third party.

Or you can turn everything off and choose an acoustic instrument. 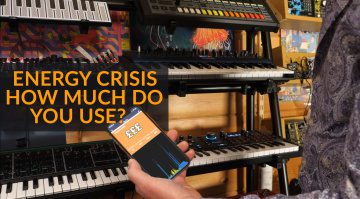