Shooting for yourself is something I talk about a lot, I talk about it a lot but I have struggled to do it for the past 12 months.

In 2016, I shot maybe 20-30 shoots that were for me to try out new skills, develop my job, and give myself a break from the paid work I was doing.

In 2017, I only did 4 shoots like this. Now it’s kind of because I’ve been a victim of my own success, my commercial work has grown tremendously and has become my biggest year of photography in terms of income and hours worked. This meant that my personal work had to take a step back. Well, not a little, he wasn’t even in the back seat, he was left at home in a closet that was locked and nailed! 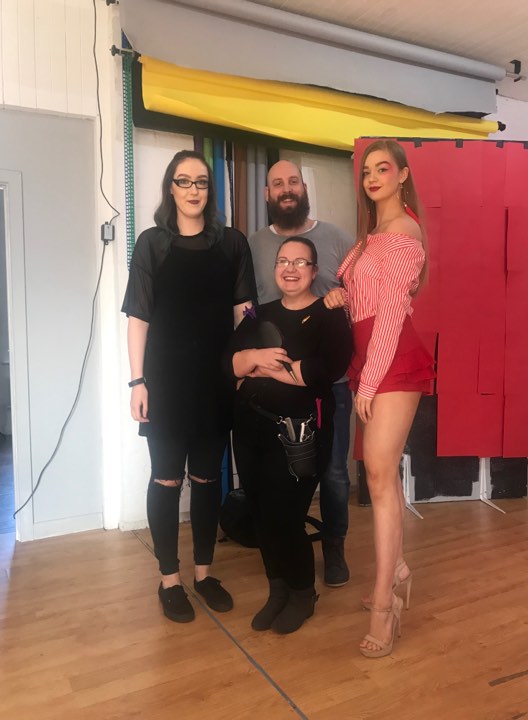 I have probably 40 Pinterest boards full of shoot ideas that never got past the planning stage for one reason or another. None of these ideals really tickled my envy for this shoot. I needed something new, something that I could create relatively easily with a pretty impactful result. 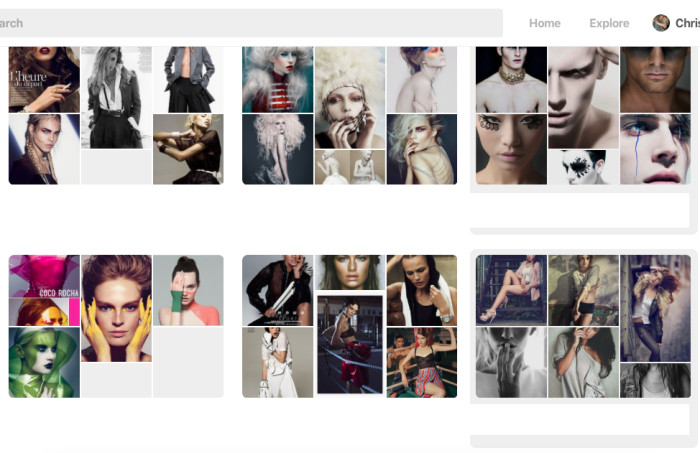 I turned the source which I do often when I need inspiration. Not Google. Wife.

She is a passionate follower of fashion and makeup trends, and when I asked her for an idea, she found it very quickly. It was simple. It was bold and it was relatively easy to put together; Red rose.

Clothing was pretty important on this shoot, I would say it was decisive. If the clothes didn’t compliment the color and feel of the shot, they would have let it down.

I didn’t have a huge budget for clothes, so I had to use several different tactics. ASOS’s return policy and the hope that Primarni has something that fits the theme.

I don’t have a lot of experience buying women’s clothing, but the fact that I was only looking for two colors made finding what I wanted that much easier.

Add to that the ability to search by price on ASOS, that meant I could narrow down the selection from thousands of items to just a few. 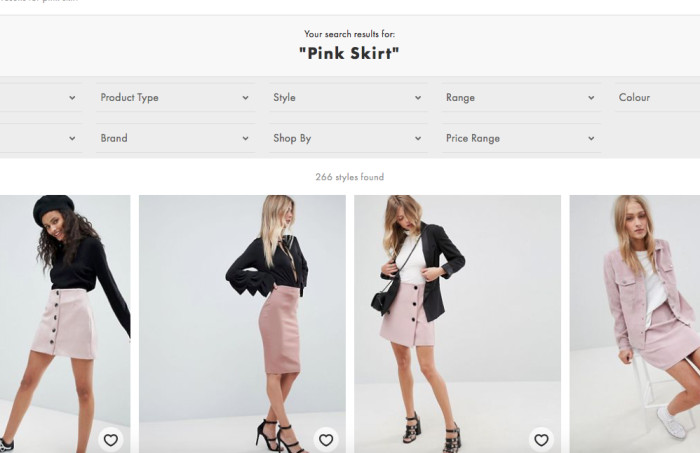 I ordered two outfits from ASOS before heading out into what looked like Primark’s Abyss in search of items that would work.

Now, just like searching online by color, it has become much easier to do this in the store as well, pretty much just setting my eyes to the colors I was looking for allowed me to cut all the noise and get away from it all. direct to the colors that would work for me. It was relatively painless 10 minutes. Although it took the woman longer to find slippers for our son…. it’s a different story after all.

I added a few accessories with earrings that would help add to the overall feel and style, but I stopped before shopping for bags and coats. If I was shooting for a client it would be another matter as I could pass these costs on, but when I was shooting for myself it didn’t make much sense to add that extra expense at this point.

Keeping the theme simple yet effective, I went through my head to see what I wanted to create with the background. The color of the blocks was the main thing in my head, no patterns, no complications, just two colors of blocks. Pink and red.

I already had red paper from Creativity Backgrounds (Cherry Red), the photographs of which I know well. It’s deep, it’s not too cheesy and I knew it would compliment what I wanted from the Carnation Pink soft paper roll. 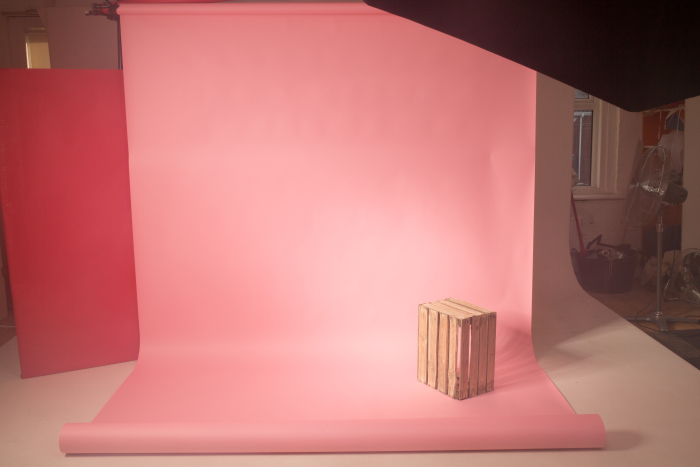 Now, having those rolls of paper wasn’t enough, I didn’t just want to shoot colored blocks one at a time. It’s boring, it doesn’t push me and it really doesn’t do anything for the viewer.

So I used some old fairly large diffuser frames and covered them with paper, one of each color. This then gave me shapes to use, if they stood up it was a big frame, if they were lying down it was a step, if they were standing on their side it was the base of a wall. Using something like this meant that I could change the look of each set with minimal effort and time. 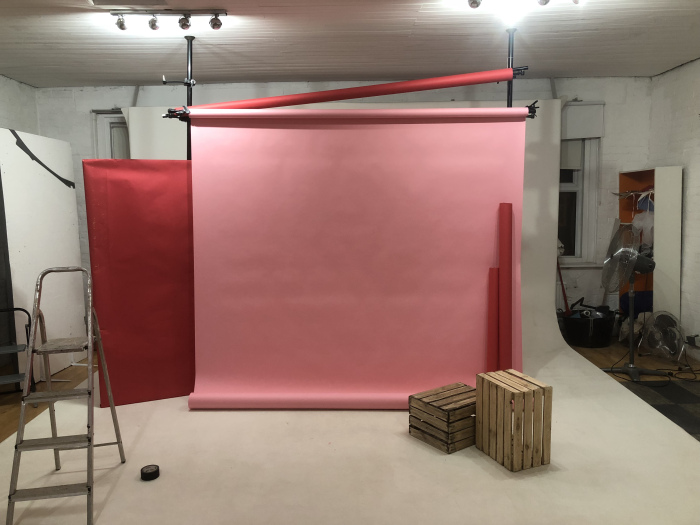 I also used red scraps of paper to use as a “challenge prop” for the models. Harriotte even used it as an admiration in a rowboat while trying to think of ways to use it.

The only other prop I used were some apple crates I bought recently, to help break up the color just a little bit, but also to add a little sizeable context to the scene and to put a bit back into it. texture. 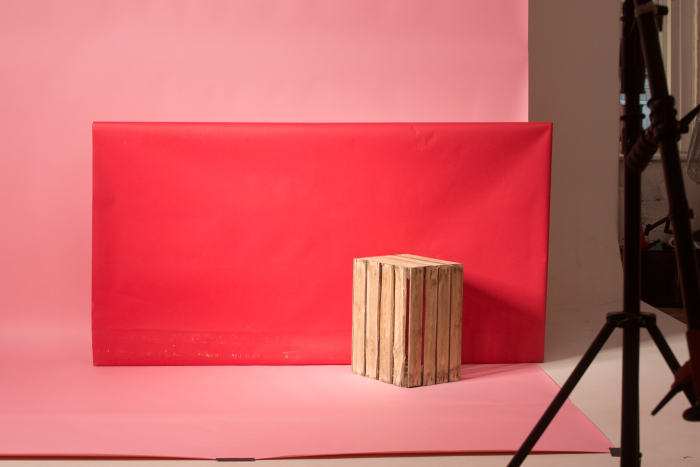 On the lighting side, I already had a general idea of ​​what I wanted from the shots and how I wanted to light it. Being a creature of simplicity, I didn’t want a huge installation, and knowing that the majority of photos would be taken in the same kind of place, I wanted a fairly static installation. 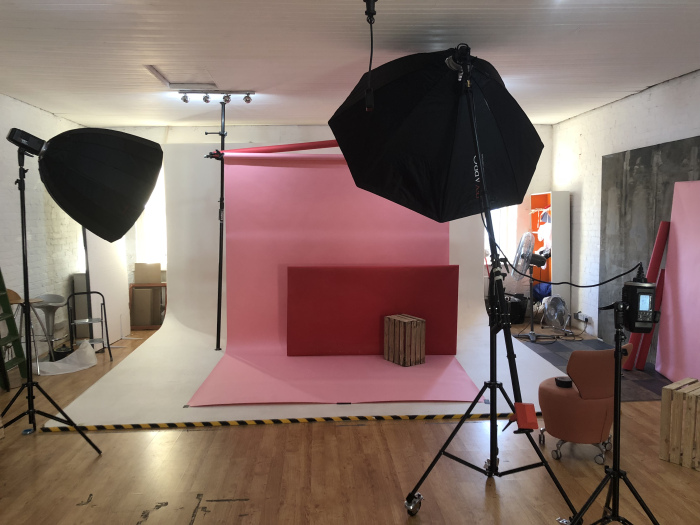 I opted for my main light to be a Pixapro CITI600 with a 90cm deep Para box with the exterior diffusion removed. This meant I was getting a slightly harder, more contrasting light rather than using both diffusing panels and getting a softer light. I did this because I wanted the skin to stand out and I wanted a little more shadow behind the image behind the subject. I used a Pixapro CITI600 and a Pixapro 170cm Octabox as fill light, so soften those shadows slightly and also fill in some of the shadows on the models face, although I wanted some oomph I didn’t want a lot of shadow on the face .

As for the light powers, they were both set to the same wattage, as the outer diffuser was removed on the Deep Para. lit up a lot more, so it was less powerful, so filled in the shadows just enough. 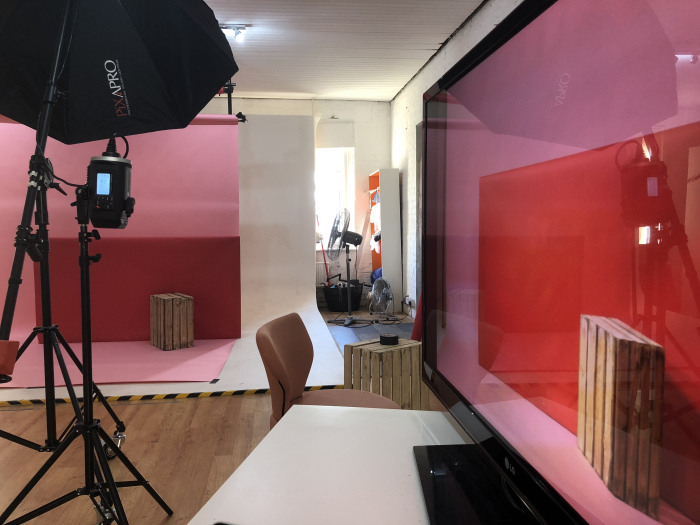 Whenever I work on sets like this, especially with a big crew involved, I try to shoot Tethered wherever I can, on a big screen. This means the whole team can see what it looks like, whether we need to adjust hair and makeup or change an outfit. It also makes it easier to communicate with the model, as they can see exactly what I see in the image. 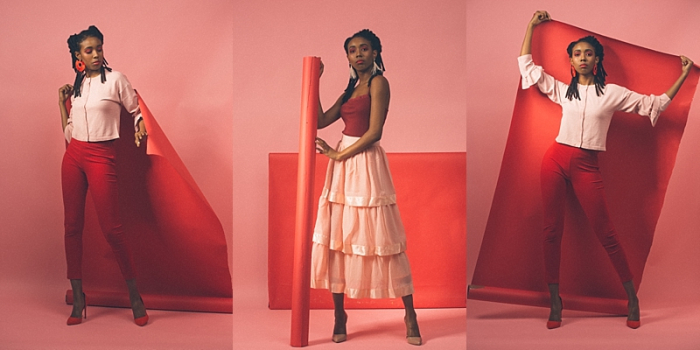 The majority of the filming had to take place within the width of the pink backdrop, which meant there was minimal movement of the lights and tethering equipment, making it much easier to switch between outfits and looks.

The two models, Kandace and Harriotte, took turns to be photographed in each of their outfits. I changed each setup very subtly in order to still convey the look I wanted but to have enough variation to create some interesting setup images. Things like adding boxes, removing screens, etc. 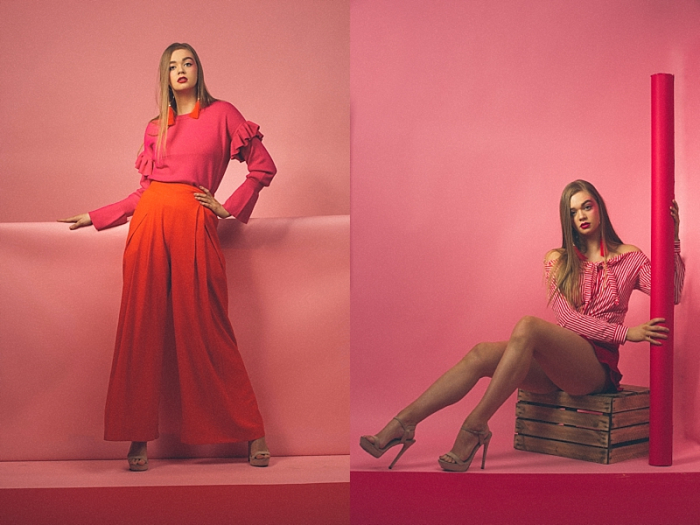 If you’ve followed my work before, you’ll know that I don’t use exposure meters, so adjusting the exposure for the scene was largely a manual process of Test Shot> Adjust> Test Shot> Accept. .

When we finished shooting the full shots, we moved to another area where I had also done another background by hand. I used an 8ft x 4ft V-dish and glued sheets of dark red paper so that I had a different colored background but also a bit of texture across the edges of the paper. . 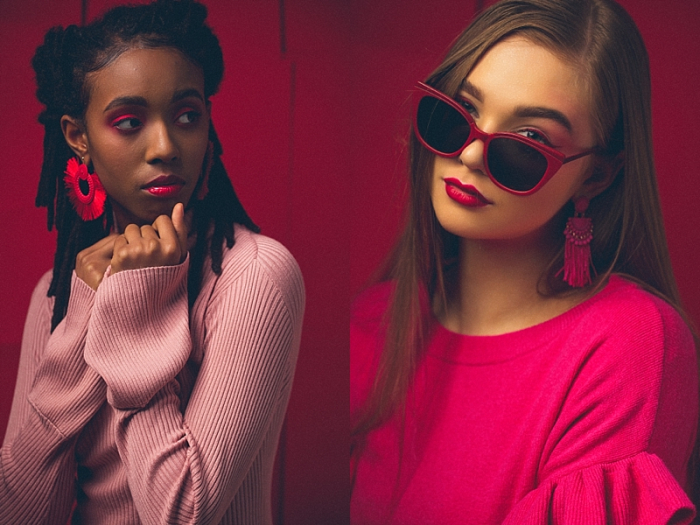 The lighting of this installation was very simple. I added the front broadcast panel to the front of the Deep Para Box and installed it about 1 foot above the subject, 45 degrees to the left of the camera. This made it possible to create beautiful soft and deep shadows on our models. 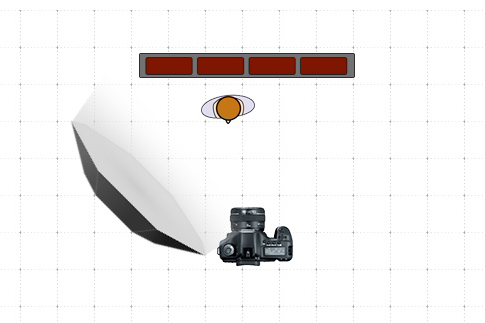 On the editing side, I had an idea in mind of what I wanted to create but I was not 100% sure of the path I wanted to take. The problem with shooting against large blocks of paper is that there is no texture so it can look a bit flat and can sometimes result in streaking in the file.

Due to the outfits the models wore, I knew that an older film edit would work well enough to slightly desaturate the colors and also add texture through the grain of the film. 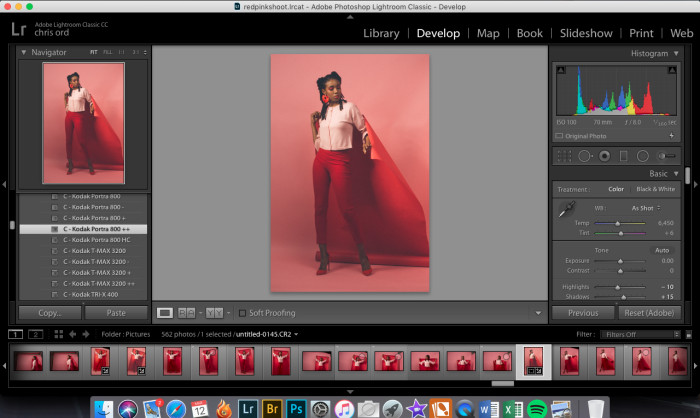 don’t often use Lightroom to edit anything, but I have a few VSCO presets saved there. I transferred the images to Photoshop to tidy them up, remove wrinkles from the paper, and do minimal retouching on the models before bringing them back to Lightroom to apply the preset.

I went with the Kodak Portra 800 ++ preset, it gave me a level of desaturation that I was looking for while maintaining richness to the skin. It also put a level of grain in the image that I was happy with. 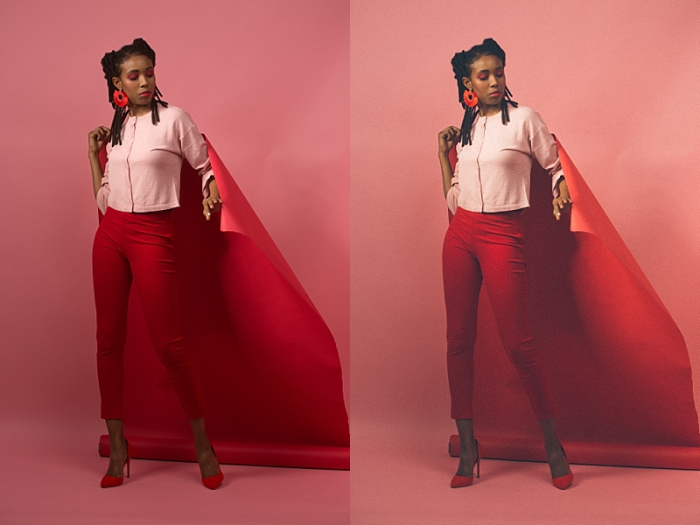 Straight out of the camera Kodak Portra 800+ Vs Preset 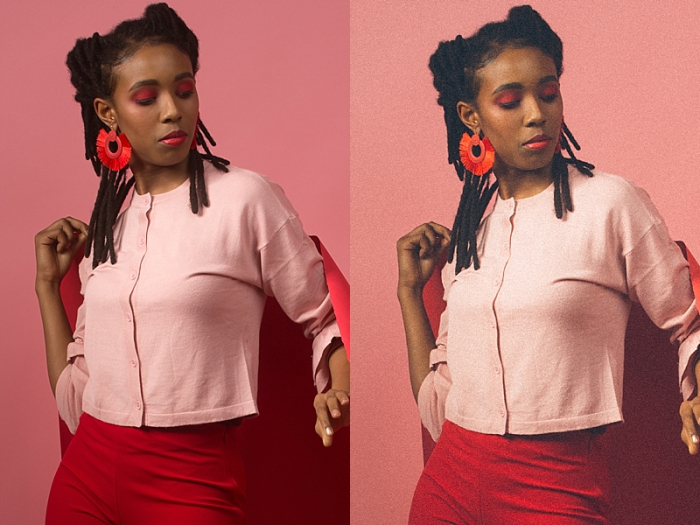 Notice the difference in the grain

So there you have it, a little insight into what goes into the planning and production of a shoot like this.

Keep an eye on my social media over the next few weeks as this shoot will be featured in an American fashion magazine.

Thanks for reading and don’t forget to subscribe to the newsletter to see more behind the scenes like this.

Chris Ord is a self-taught photographer based just outside Newcastle, UK. He specializes in weddings, portraits, fashion and commercial photography. To learn more about Chris’s work, check out his website and follow him on Instagram and Twitter. This article was also posted here and shared with permission.