Apple recently launched its latest MacBook Pro for creators. While these laptops offer an upgrade over previous generation MacBooks, they fall well short of RTX-powered NVIDIA Studio laptops. New MacBook Pro buyers should expect to spend at least 11,000 Dhs. At the same time, Nvidia Studio laptops surpass the MacBook Pro for creative pursuits like 3D modeling, video editing, and graphic design. Plus, NVIDIA Studio has a lot of great system choices that cost less and offer a lot more benefits in addition to being faster.

top reasons why creatives should ONLY consider Nvidia Studio laptops

NVIDIA earned its reputation primarily with gamers through its graphics processing solutions, but those same GPUs and supporting software can also support creation.

PERFORMANCE – NVIDIA Studio products are powered by RTX GPUs – the world’s most advanced and fastest GPU. They deliver 5x faster performance for 3D content creation and the fastest in video/photo editing

AI ACCELERATED APPLICATIONS – NVIDIA Studio has over 75 of the best accelerated creative apps for RTX GPUs, including the best apps for photography: Adobe Photoshop and Lightroom, the best video editing apps: Adobe Premiere Pro and Blackmagic Davinci Resolve, the best streaming app , OBS and all major 3D renderers including Blender, Autodesk Maya, 3DS Max, V-Ray to name a few – and that’s on top of over 200 NVIDIA GPU accelerated apps. Additionally, with NVIDIA Studio Drivers, creators can benefit from an extremely stable experience, as NVIDIA drivers are thoroughly tested against a long list of the best creative applications, preventing your system from crashing or being slow. .

The fastest growing area of ​​content creation is 3D. We see how several factors are converging towards it – the eruption of virtual worlds, the increase in the use of AR and VR, and the increased accessibility of creative tools that allow artists to dive into 3D. Most content creators will need to start adding 3D to their workflow. And for that, NVIDIA Studio laptops are in a class of their own. Here are the top 5 3D rendering apps and you can see how performance compares between NVIDIA Studio laptops and MacBook Pros. 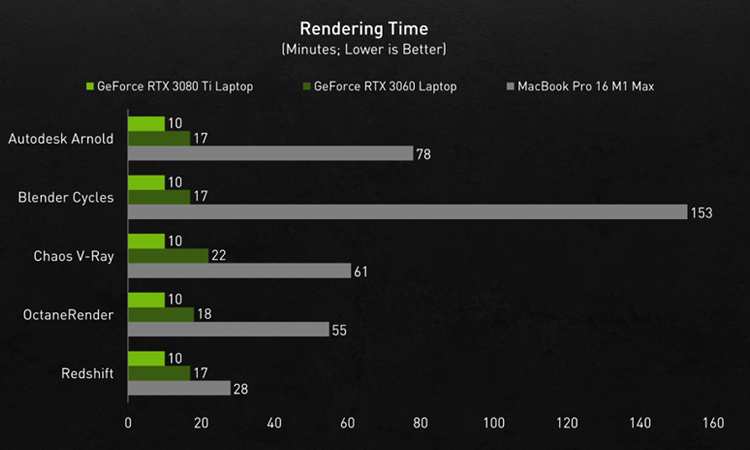 This stunning performance comes from the RTX GPU, which is not only faster, but also offers dedicated hardware acceleration for ray tracing and AI denoising. for fast and responsive feedback.

If you add to that the possibilities that the NVIDIA Omniverse platform provides, there’s really only one choice for creators – NVIDIA Studio.

Not only is NVIDIA Studio perfect for 3D artists, it’s also fantastic for video and photo editing. Here you can see the benchmark of NVIDIA Studio laptops in the most popular photo editing apps. In an example project, NVIDIA GPUs finish the job much faster than MacBook Pro 16s with the M1 Pro or M1 Max. 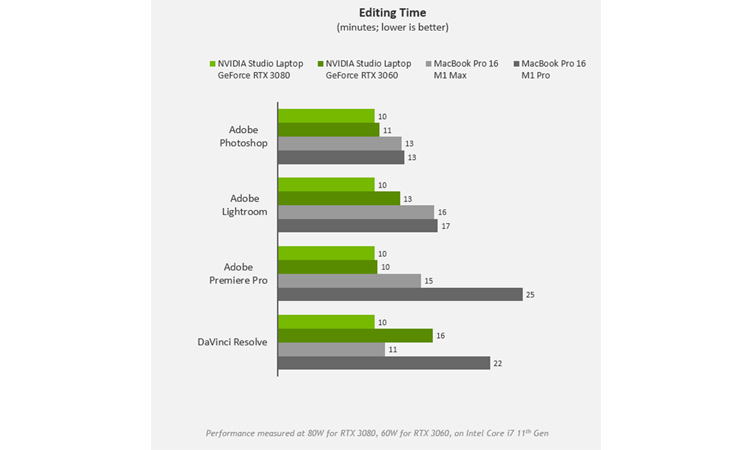 FREE EXCLUSIVE AND USEFUL APPLICATIONS – Another great reason is that NVIDIA Studio has a powerful set of exclusive free apps to support creators in unique ways, like NVIDIA Omniverse to accelerate 3D creation and collaboration, Broadcast lets you use AI to enhance your microphone, webcam, and speakers, turning any room into a home studio. It’s incredibly useful for streamers, students, and business meetings, and finally Canvas lets you draw beautiful landscapes with just a few simple strokes, while dramatically reducing the time needed for drafting and concept work. 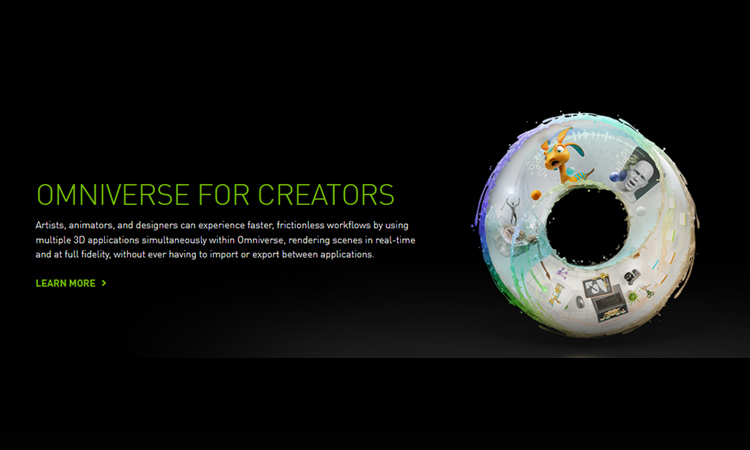 Another good reason is the vast selection of form factors, features, and performance, as NVIDIA Studio is available in a wide range of Studio-validated systems: from ultra-portable laptops to minimalist all-in-one PCs, and more. by ultra-powerful multi-GPU workstations.

As you can see, NVIDIA Studio is a complete top-to-bottom platform offering distinct value to creators. View this page HERE and this video HERE to learn more.

To view some of the Studio Laptops available at Virgin Mega Store UAE, click on the links below