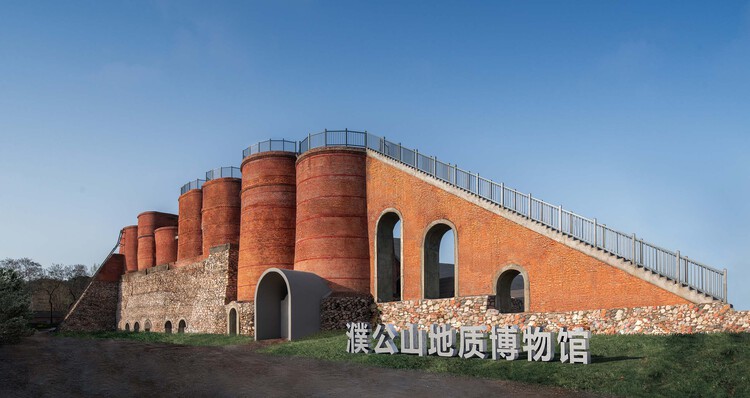 Text description provided by the architects. Pugong Mountain is located in Xinyang, Henan Province. According to legend, during the Tang dynasty, Taoist Pupu lived isolated on this mountain, collected medicine and did alchemy, and hung pots to save the world. Their virtues were admired by all, which is why they were called Pugong Mountain. Documents report that in the past, the ancient trees, vines and pine wings of Pushan were empty, and looking at the vast expanse of the sky in the distance, there were purple mists in the mist;

Pugong Mountain is a limestone mountain. Over the past decades, China’s rapid urbanization has brought enormous business opportunities to Pugong Mountain. In order to burn the lime, hundreds of small lime kilns were built locally. The once lush Pugong Mountain has become a hideous “Langya Mountain”. However, this type of development at the cost of environmental degradation is not sustainable. After the introduction of the country’s strict environmental protection policy, the lime kiln was completely shut down and it became an abandoned lime mining site.

In order to promote the concept of sustainable development, the People’s Government of Xixian County plans to build a lime kiln themed museum. After comparing several plans, this plan was finally selected. We integrated the new museum with the existing lime kilns and used the old group of continuous kilns as the gateway to the Geopark. The roof of the kiln has been transformed into a viewing platform, and the exit from the ashes of one of the old kilns has been set up as the main museum of the museum. At the entrance, an old brick ladder preserved for supplying materials is “inserted” into the museum, making the pit of the incomplete mine, the dilapidated gypsum kiln and the brand new museum an organic whole.