New virtual production studio at the University of Tampa

University of Tampa film students are getting futuristic hands-on experience with a new virtual production studio on campus.

TAMPA, Florida. – University of Tampa film students prepare for the future with hands-on training in a virtual on-campus studio.

Hidden inside the college campus are a jungle, a mountain range, the flight deck of an aircraft carrier, and the surface of the moon thanks to a partnership with Vū.

“It’s cutting-edge technology that would have been unthinkable to me when I started,” exclaimed Aaron Walker, associate professor and chair of the film, animation, and new media department at UT. “I started editing films and now it’s much more difficult to train students for the world because you also have to know how to do these 3D elements and these other kinds of digital tools. You have to know how to integrate everything. “

The studio is relatively small. It’s about 1500 square feet, but one wall features a 30-foot-long curved LED wall that’s basically a gigantic computer screen. It’s also built-in and connected to a computer that has hanging, suspended-in-space trackers that attach to the camera itself.

“So when you actually move the physical camera, the background moves and exactly matches what’s happening in space because of that camera movement on the track. That’s actually the special secret sauce “That’s what makes it completely professional. It lets you preview the image and it makes it look real when you see the final shot,” Walker explained.

The goal is to engage in the newest and most cutting-edge form of film and video production, called virtual production.

“In space we can put any image we want behind an actor and have actual actors and props in front of him and we can change the background to suit whatever we’re doing” , Walker said.
Walker says the benefit to students is immeasurable.

“It’s really cool because I can really see what profession I’m going into. It’s emerging media,” said UT junior Hannah Sam.
The possibility of immersing the actors in the landscape makes it possible to sell the whole production. 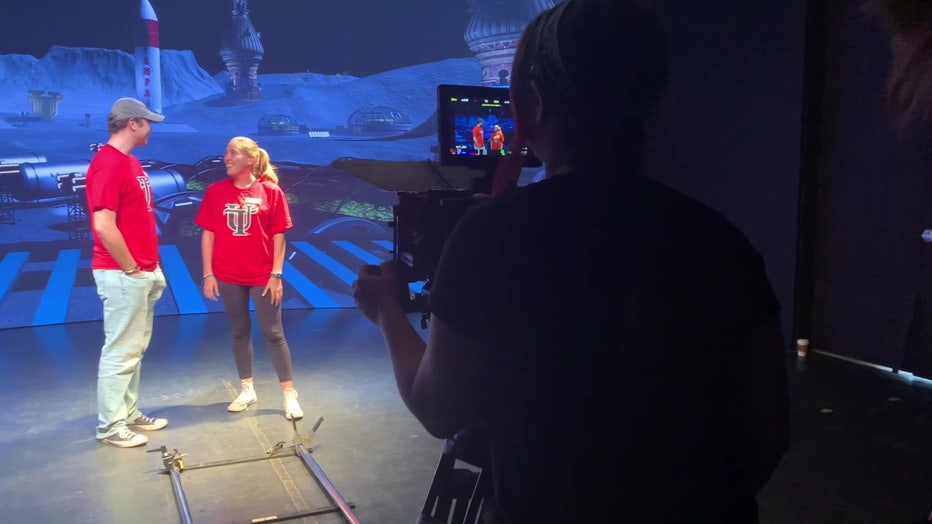 “By having our own virtual production studio, it opens up endless possibilities by having our actors in any location and also allowing them to see the locations they’re in,” said Hunter Dombroski, senior of the UT, “Rather than with a green screen, you can ‘I can’t see where you are. You have to kind of imagine it and have your actors imagine it to put them in that mindset.

“Having the opportunity to spend time, class time, weekend hours building your own projects in this space, actively dreaming in this space means that when they enter the professional environment, they will have already worked all these very complicated and very difficult techniques and skills to integrate, which makes them immediately employable for the future, “said Walker. So the things that they are going to learn here are going to be on their CV and their find jobs for the next 15 years and that is extremely important.”