How far has Apple come from the very first iPhonethe one who was inducted by Steve Jobs in January 2007 and who, as the boss of the firm predicted at the time, revolutionized telephony.

With the launch of the iPhone 14, and in particular the iPhone 14 Pro, the company now led by Tim Cook has just taken a leap forward on the camera side with a 48-megapixel main sensor. Enough to make you want to dive back into the history of this component that has become essential over time, to the point of generating more than 3000 billion shots last year.

The Slow Progress of Apple’s Camera

Long considered the poor relation of Apple smartphones, the camera, decried after almost all iPhone presentations, has never rivaled megapixels. Instead, engineers worked hard on lens size, pixel size, and algorithms to improve the output image, day or night.

Edge of the iPhone

Launched with a sensor 2MP, the original iPhone was limited to 1600×1200 pixel photos, with no flash or video capability. It was vastly outdated and yet that didn’t stop the Cupertino-based company from making a splash. He even renewed the same component in the iPhone 3G.

It was only with the iPhone 3GS, in 2009, that Apple began to improve the quality of its sensor with a target of 3.2 megapixels and an aperture of f/2.8. Still far from competitors in terms of figures, it nevertheless incorporates some new features such as autofocus and VGA video recording (480p) up to 30 frames per second, as well as georeferencing of photos and videos. The shots were in 2048×1536 pixels, but still no flash.

The following year, in 2010, the iPhone 4 changed the design of the device with a square style found in 2022, a screen retina (double resolution) and above all a 5 megapixel rear camera. The latter was accompanied by an LED flash, finally.

Remember that this was the first iPhone to offer multitasking. We could finally keep several applications open!

In 2011, the iPhone 4s, which took on the design of its predecessor, finally caught up with competitors like Samsung with an 8 megapixel sensor and the possibility of filming in Full HD 1080p. Additionally, it brought face detection in photos and video stabilization.

In 2013, the iPhone 5s offers a small update with an f/2.2 aperture that brings more light into the sensor. It was also he who introduced the double LED flash, one white, the other yellow. The software part is responsible for using one or two LEDs depending on the lighting conditions. The sensor remains at 8 mpx.

Another small development in 2014 with the iPhone 6 which benefits from a 5-element lens, panoramic mode, burst mode and optical image stabilization on iPhone 6 Plus only. The sensor remains at 8 mpx and with an aperture of ƒ / 2.2.

It took four years for the iPhone to reach a new milestone. With the iPhone 6s, the rear camera reaches 12 Mpx and offers several new features such as Focus pixels (phase detection autofocus), Live Photos, panorama mode, image noise reduction and digital zoom. As with the iPhone 6, only the iPhone 6S Plus has optical image stabilization. Apple stayed on an aperture of ƒ/2.2. Finally, the iPhone 6S is the first to allow filming in 4K.

New small evolution with the iPhone 7. Always at 12 Mpx, the sensor which opens at ƒ/1.8 is composed of six elements and accompanied by a Quad‑LED True Tone Flash. Photos and Live Photos benefit from a wide color gamut.
But the biggest novelty is reserved for the iPhone 7 Plus which incorporates two sensors. In addition to the main lens, Apple placed a telephoto lens with an aperture of ƒ/2.8 and a 2x optical zoom.

2017, we arrive at notched iPhones with the iPhone X (to be pronounced iPhone 10). As the price of the iPhone soared due to the new edge-to-edge design and an OLED screen (a first in the line), Apple took over the two sensors from the 7 Plus but placed them vertically.

If the wide-angle sensor remains with an aperture of ƒ/1.8, the telephoto lens offers an aperture of ƒ/2.4. On the software side, Apple has released the famous Portrait mode which allows you to sublimate the people taken in the photo by blurring the rest around.

Very few new features in 2020 with the iPhone 12 Pro which retains its three sensors. The wide angle goes to an aperture of ƒ / 1.6, the night mode goes to Portrait mode thanks to the new Lidar scanner and above all it is possible to have shots in ProRaw format, without loss of quality. All still in 12 Mpx.

As for the video part, Apple was the first to make the iPhone compatible with Dolby Vision. In practical terms, this means shooting in 4K, 10-bit HDR and 60 frames per second, for maximum light and shadow detail and greater color depth.

The sensor protection is made of sapphire crystal and on the software side, Deep Fusion takes care of taking several photos and “mixing” them to obtain the best shot. But the biggest novelty of the iPhone 13 Pro is the Macro mode which is decked out with the telephoto lens. It is possible to capture details up close. Also note that the digital zoom increases to 15x on this model.

On the video side, the Cinematic mode allows the recording of videos with a reduced depth of field, as in Hollywood according to Apple.

Finally the iPhone 14 Pro. As you will have understood, this is the biggest leap forward in terms of megapixels for the iPhone, which goes from 12 to 48 Mpx. If the second company deep fusion by Photonic engine software side. Photonic Engine is computational photography technology that uses hardware, machine learning, and algorithms to improve your photos, especially those taken in less than ideal lighting conditions. This does not replace night mode, but improves it.

As for the photo sensors, they are even bigger, almost disproportionate on the iPhone 14 Pro. They all have 100% focus pixels.

The main change therefore concerns the main wide-angle sensor which can shoot at 48 megapixels by activating certain settings specific to the iPhone 14 Pro. It is indeed necessary to activate the ProRaw format to take advantage of details never seen on an iPhone. Attention, each snapshot takes about 80 MB of storage space, so remember to choose a suitable model when purchasing. In any case, the first tests show a major advance in photography, something that we are currently checking by testing the iPhone 14 Pro (article to come).

On the video side, Apple has added a mode Store which makes it possible to film sports scenes in 4K without the need for an accessory to stabilize the image.

The iPhone 14 Pro is also the end of the notch and the arrival of the Dynamic Island, as well as the advent of the always-on screen.

There you go, you know all about the photo capabilities of the iPhone, the most used device in the world for years.

Finally, here is a graph that summarizes the evolution of the iPhone camera: 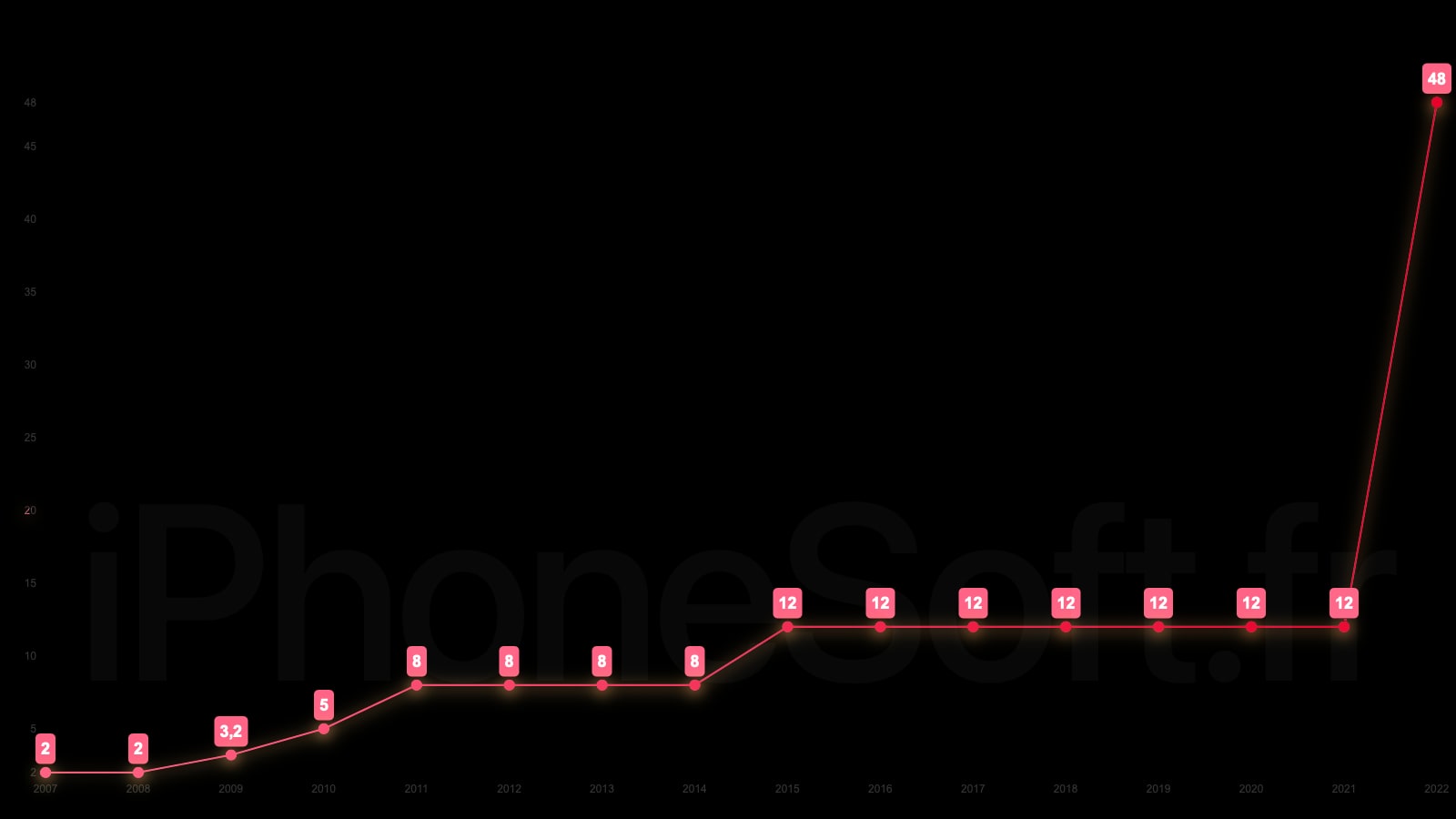