The Second Studio (formerly The Midnight Charette) is an explicit podcast about design, architecture and the everyday. Hosted by architects David Lee and Marina Bourderonnet, it features different creative professionals in unscripted conversations that allow for thoughtful shots and personal discussions.

A variety of topics are covered with honesty and humour: some episodes are interviews, while others are advice for other designers, reviews of buildings and other projects, or informal explorations of daily life and design. The second workshop is also available on itunes, Spotifyand Youtube.

This week David and Marina are joined by Stuart Graff, President and CEO of the Frank Lloyd Wright Foundation to discuss the foundation’s mission; the role that cultural institutions play in supporting creative professions; preserve and deepen Wright’s legacy through programs and collaborations; intellectual property; Stewart becomes CEO of the foundation; run a successful non-profit organization; the principles of Frank Lloyd Wright; and more. 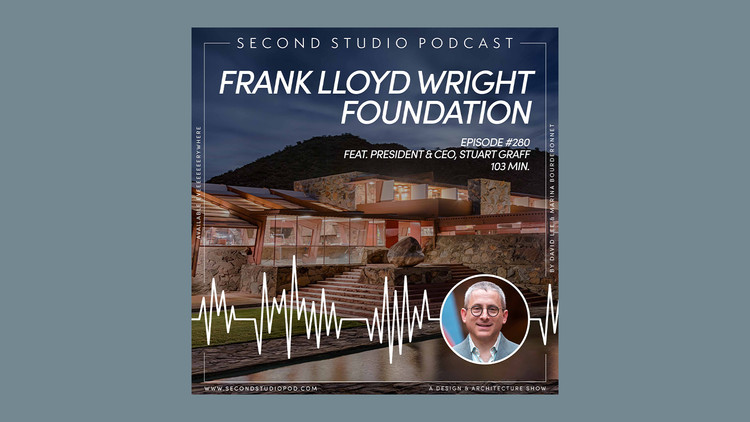 For Wright, architecture is not buildings, buildings are a form of architecture. [Architecture] is this feeling of continuity and connection with everything around us. You might think of architecture as an ecosystem in Wright’s world; how we relate to the things around us, and they relate to us and we create this self-sufficiency…where everything grows and thrives through this sense of connection rather than competing in this destructive way for resources. (12:27)

The role of cultural institutions in the world of design. (13:23)

Why the Foundation harnesses preservation for the future. (16:26)

Wright also viewed architecture and the principles of architecture as responding to the ever-changing needs and changes of society and the world around us. So how then could we establish an orthodoxy for something that, according to the definition of its creator, Frank Lloyd Wright, was destined to change over time? So we very quickly abandoned any notion of orthodoxy. I love Heterodoxy. I think the role of the Frank Lloyd Wright Foundation, and I would go so far as to say, the role of any cultural institution, is to create a space for dialogue, for the exchange of ideas and not just ideas between academics and current enthusiasts and participants but also a dialogue between past or between past, present and future. (24:06)

How the work of Frank Lloyd Wright had inspired Stuart from an early age. (33:36)

We have these programs for kids and a lot of people think it’s about getting kids to want to be architects, or getting kids to be Frank Lloyd Wright enthusiasts, or learning about design, sustainability or certain things in STEM education. That’s absolutely true, but if the only thing a child learns is that their original voice and way of thinking about the world deserves to be expressed, [then] we are so much better off as a society, if every day a child learns this about themselves, learns to use their voice. And I think that’s also part of the Frank Lloyd Wright story. (1:22:47)

How Stuart became President and CEO of the Frank Lloyd Wright Foundation. (41:20)

How designers today should implement Frank Lloyd Wright’s principles in their work. (57:57)

Appreciate the work of Frank Lloyd Wright beyond his “Starchitect” status. (01:11:40)

Wright often said his favorite building was next and I’ll just say this; The answer depends on what is happening right now, where you are. But I have never been in a Wright building that failed to move me, to make me think differently about the world around me. And it should be such that these buildings are preserved, as historic sites, homes, museums, whatever you want to call them. If they help us change our minds about the world, then Wright is still doing his job. (1:32:50)

Check out previous editions of The Second Studio Podcast.