kois associated architects is a greek architecture firm founded by stelios kois in 2008. the Athens-based studio works in various fields of design, from architectural projects – both private and public – to exhibitions, interiors and furniture. the mirage residence in tinos, the cafe at the museum of cycladic art in Athens, the Gagosian gallery in Athens, and the Blurry venice installation at the 2019 biennial, which kois envisioned as artistic director, are just a few examples of the company’s diverse portfolio. although morphologically very different, all of their projects are developed through a unique process that focuses on timelessness, attention to detail and the surrounding context.

‘our architecture does not fit into a particular look or style, which we repeat or simply adapt as appropriate just to be recognizable. it is something that is born entirely from its ashes, ‘ stelios kois says designboom.‘we have been blamed for this, for the fact that each work is as if it has been made by a different person. they told us badly, but we took it as a compliment.

located in the heart of Athens, in an emblematic building in Kolonaki which also houses the Peruvian Embassy, ​​the company’s studio space is presented as the perfect physical manifestation of the architectural principles of its founder. Described by kois as a ‘monk’s cell’, the serene interior showcases timeless elements and materials that coexist with contemporary works of art and design. see the studio footage and read our interview in full below.studio images by anestis michalis

INTERVIEW WITH STELIOS KOIS, FOUNDER OF THE STUDIO

designboom (DB): when did you create kois Associated Architects?

stelios kois (SK): I started the studio on my own at the end of 2008. I don’t know if I would do it now, it was kind of like a game for me at the time, I didn’t know what world I was entering. the first office was located in vassileos konstantinou and riggilis, and we left that space about a year and a half ago. the difference with the other studio is that here it is much quieter, a bit like a “monk’s cell”, while in the other there was constant panic. I understand the appeal of the aesthetics of the lab, but I like that everything is much quieter, and being able to do everything through a specific procedure. here we have a lot more space, there is a dedicated space for making models, an office space, a very large library. we are in our twenties and we work as a family, we all eat together, there is someone cooking here; but still you can see how calm it is. 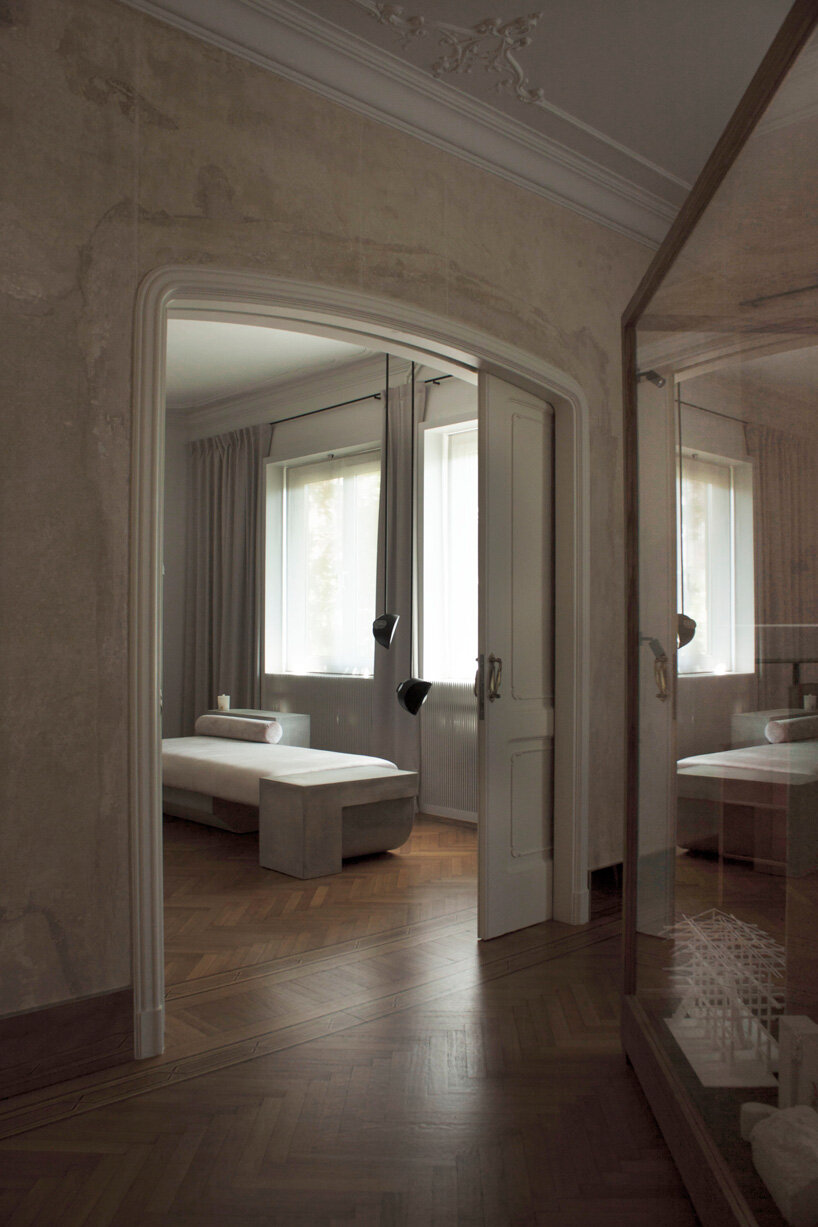 DB: what kind of projects did you start with?

SK: I have mainly worked on residential projects for many years. I had a very specific philosophy for architecture, so I focused on that, and I had a very specific set of moral principles, which I still do. I’m not sure how well these could match the Greek market, or how compatible they were with what they wanted at the time, because most people wanted something really fast then, they didn’t know. were not interested in concepts and things like “matter”, or “rot”. it was all useless to them, they just wanted to have something to impress others. for me it was quite the opposite. that is, I’m not that much interested in impressing someone. if someone sees my architecture, he understands that it is not an architecture that wants to mark the spirits. so at first I started making houses, and the first project I did “publicly” was a pastry shop. it had received a lot of publicity because it was something very special, very different, and then it started to make us better known to the public, whereas until now everything we did was private and no had nothing to do with the press. we started to open up to the press when we started working on public projects, which their owners were interested in showing, so we went into another logic. that’s pretty much how the story started. 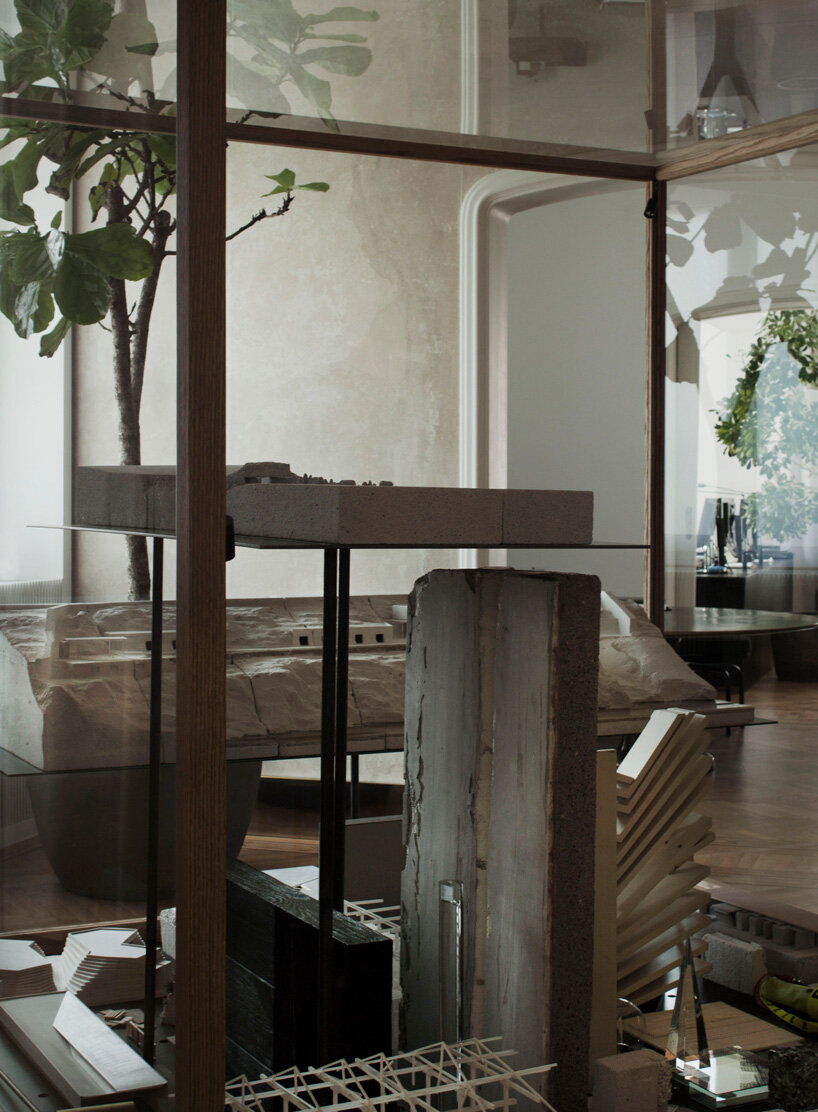 models and materials are enclosed in a glass box, located in the center of the workshop

DB: what is your architectural philosophy?

SK: if you go to ‘about us’ page on our website, we don’t really have a CV, but we do have a few videos that we made instead. the way we create our website, our image or the way we go about things is aimed at the audience we want to have. I’m not interested in anyone knowing or talking about me. I am interested in who will come as a client, to embrace the philosophy we are working for. this allows us to more easily create projects that will always be at a better level. for us, customers have a very important role in the project. our architecture is not part of a particular look or style, which we are content to repeat or adapt depending on the case just to be recognizable. it is something that is born entirely from its ashes. I sometimes hear or read this phrase in interviews, then I see the works and they are all almost identical. but we were blamed for it, for the fact that each work is as if it had been made by a different person. they told us badly but we took it as a compliment. for us the owner or the people we work with on a project play a very important role. and our philosophy is generally very much based on the whole architectural structure, that is, on all the things and all the conditions on which a work is created. the only thing common to our projects is the process we work with. there is nothing else in common, particularly morphological. the way we work, the way we approach something or the details that we focus on are common to everyone, whether it is a large or small scale project.

‘time / allusions’, part of the ‘about us’ videos

DB: However, there are elements that I find create a certain link between some of your projects. the combination of contemporary or futuristic elements with more classic elements, evident, for example, in the Museum of Cycladic Art here in Athens.

SK: it is the process that is common. the cycladic art museum was done as follows: they called us, they explained to us the problems that the building had, and they explained that it should not be demolished. we identified the main problem, which was that the Cycladic Art Museum was never recognizable. at some point everyone misses him. I’m not talking about the Ernst Ziller building, I mean the Cycladic Art Museum at 4 rue neophytou douka. the ziller building is granted by the state as an auxiliary, but it is not the true museum of cycladic art. we have tried to give the best possible solution at all levels, and the date on which the project was conceived also matters, because it was conceived in the midst of a crisis. we couldn’t take it apart, the collection couldn’t get out of the museum, and our solution had to be able to be built in phases. for the moment, some parts have been completed but not the whole of the proposal.

so, having the problem that this museum “disappears” and is not easily recognizable, we tried to bring out its character in its external image. the existing building was designed by architect ioannis vikelas, who at the time was putting all these mirrored glass surfaces in place, and it was at this time that he had already established his architectural identity. the museum was built around 1980-85. the street has buildings on both sides, which are almost identical. this type of facade, although unimpressively in shape, uses a material that has such an impressive effect by reflecting the buildings facing it. therefore, to the viewer it appears as a continuous surface, and if someone does not accidentally see it, it is almost impossible to notice it. 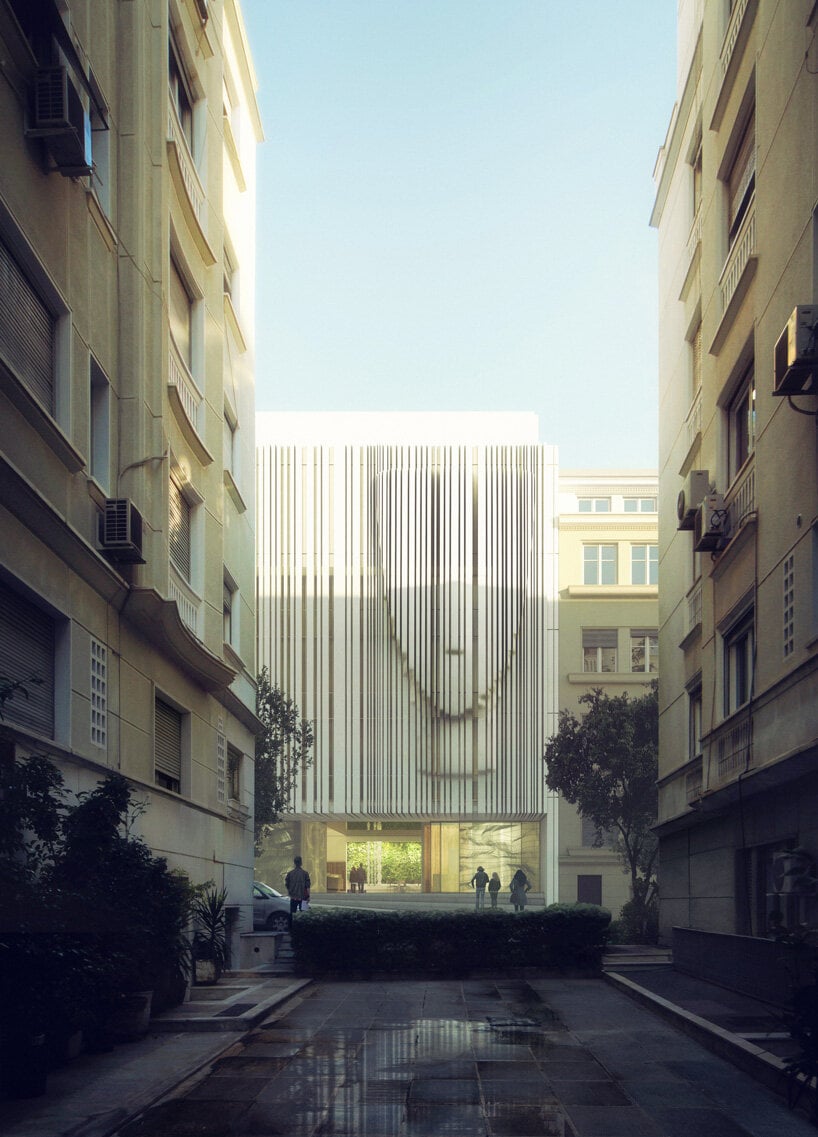 (SK continues): what we did was create a visual “pause” on this facade and allow the character of the museum to come out of this pause. we made this surface of thick vertical elements and placed it on top of the glazing, and we also opened the entrance. at the time, to give the building a certain prestige, vikelas added a marble entrance. now history has shown that museums should be open and welcoming to the public. so the second gesture we made was to remove this marble entrance, completely freeing the ground level and extending the foyer to the sidewalk, while on the facade we created this blind to stop the mirror and, immediately, the museum volume is out.

above this new facade, and in order to give the museum a more distinct identity, we have created the outline of a Cycladic marble-headed figurine (more on designboom here). but because we didn’t want it to be something very graphic, we did it with a play between form and light. because, what are the cyclades for? shadow and light. we therefore used these two concepts to be able to leave a strong imprint in the city. our intention is never to do something innovative or new, the solution always comes from discussion. even as a public building, which needed an identity, what we did was remove all unnecessary information, which in our opinion was all that, and polish its personality, i.e. that it represents Cycladic culture. 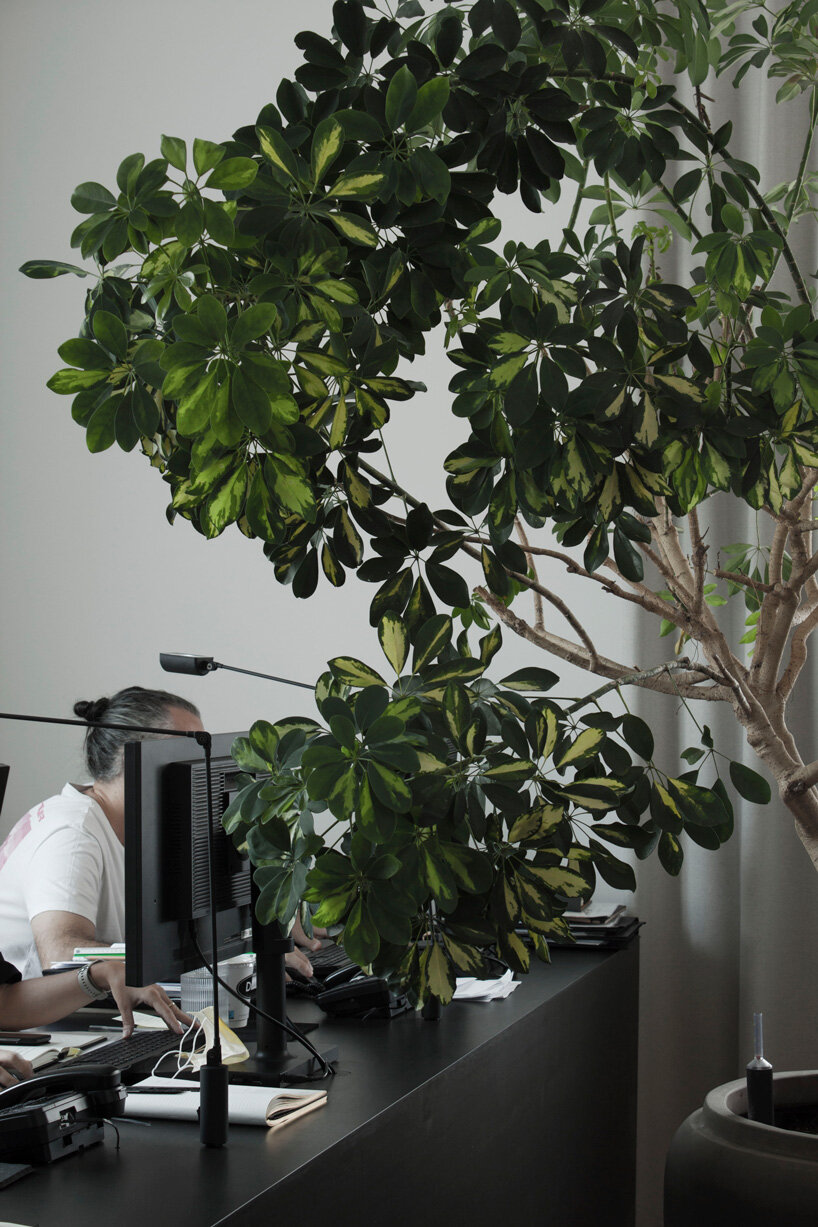 DB: Can you tell me more about ‘mirage’ and ‘shimmer’, two projects that both use reflection as a spatial element?

DB: I understand that your approach is also very much about the elements that already exist in each place.

SK: we are still interested in the existing space. to tell you the truth, if we were to do the house in tinos several times, i probably wouldn’t have to work anymore! it’s something everyone wanted. on the contrary, it was a project that freaked me out when it got all this publicity at the time. I understand its power, and I still understand it today, after about nine years. this project became popular because a reporter saw it on our website and requested it, and we were happy to provide material. from that moment it was chaos!